The soul is a very perfect judge of her own emotions, if your mind doesn't dictate to her. Because the mind says Charity! Charity! you don't have to force your soul into kissing lepers or embracing syphilitics. Your lips are the lips of your soul, your body is the body of your soul. That is Whitman's message. And your soul hates syphilis and leprosy. Because it is a soul, it hates these things, which are against the soul. And therefore to force the body of your soul into contact with uncleanness is a great violation of your soul. The soul wishes to keep clean and whole. The soul's deepest will is to preserve its own integrity against the mind and the whole mass of disintegrating forces.

What my soul loves, I love.

What my soul hates, I hate.

When my soul is stirred with compassion, I am compassionate.

What my soul turns away from, I turn away from.

That is the true interpretation of Whitman's creed: the true revelation of his Sympathy.

It is not I who guide my soul to heaven. It is I who am guided by my own soul along the open road, where all men tread. Therefore I must accept her deep motions of love, or hate, or compassion, or dislike, or indifference. And I must go where she takes me, for my feet and my lips and my body are my soul. It is I who must submit to her.

This is Whitman's message of American democracy.

The true democracy, where soul meets soul, in the open road. Democracy. American democracy where all journey down the open road, and where a soul is known at once in its going. Not by its clothes or appearance. Whitman did away with that. Not by its family name. Not even by its reputation. Whitman and Melville both discounted that. Not by a progression of piety, or by works of Charity. Not by works at all. Not by anything, but just itself. The soul passing unenhanced, passing on foot and being no more than itself. And recognized, and passed by or greeted according to the soul's dictate. If it be a great soul, it will be worshipped in the road.


P.S.
- Other D H Lawrence poems, quotes, etc. may be found at my Poet-in-Residence blog. 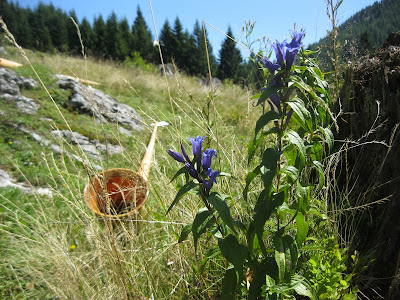 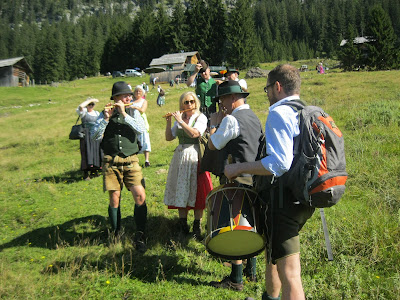 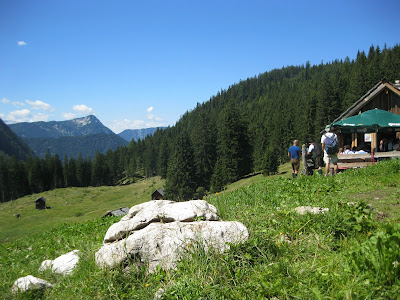 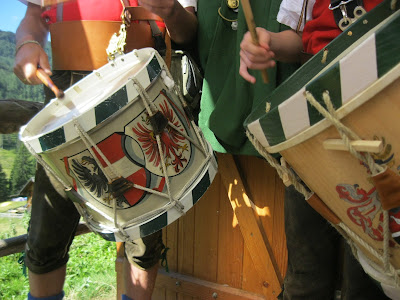 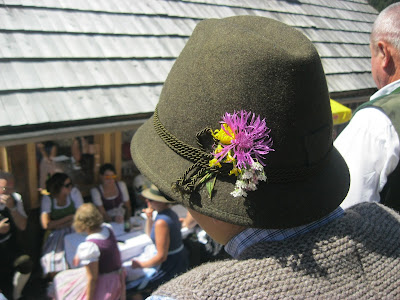 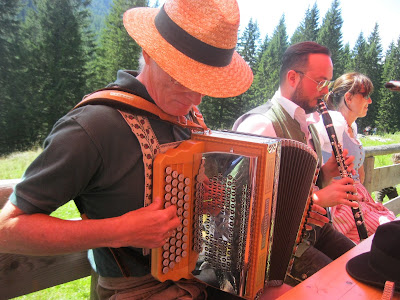 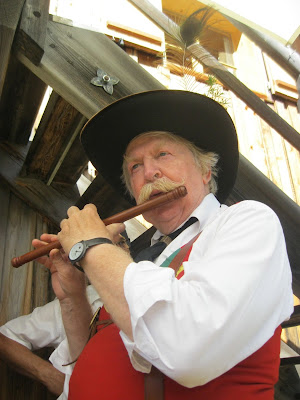 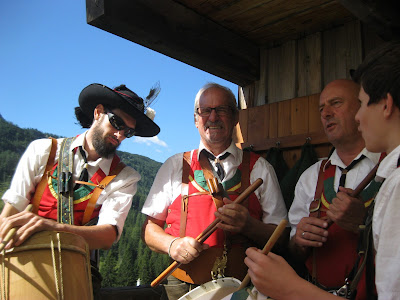 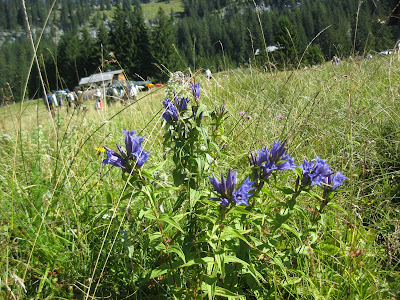 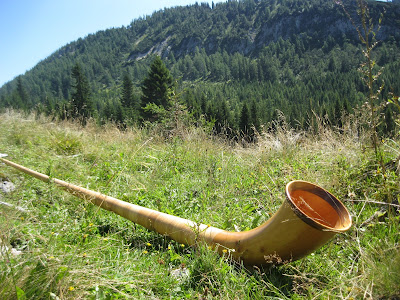 Not on the 9 o'clock News


Real news is often not reported in the EU. Should that surprise us?

Watch on Tube. Watch till the end. 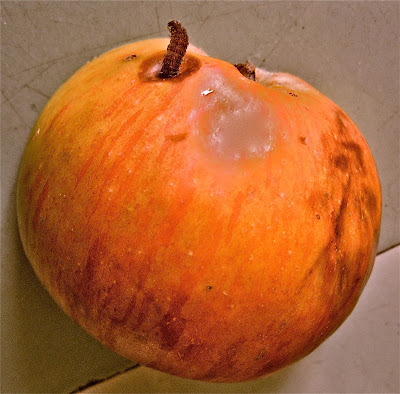 A fungi time of year

In the the first photo he looks his creepy best. 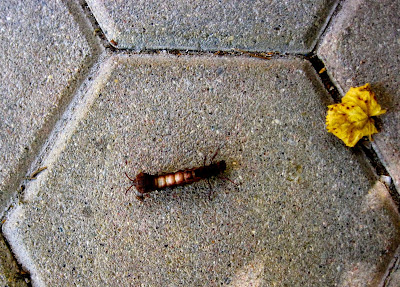 
According to forecasters a storm is on the way.

Unfortunately a marquee at a concert venue was blown down by the storm and two people inside were killed and quite a few injured. Today we have a normal sort of gloomy drizzly rain and maybe later there will be some thunder showers and it will brighten up. The forecast is good for tomorrow and next week with normal summer highs in the range of 25 - 28 C.

"This is among the most valuable work produced in our time"


The above quote comes from James Merrill and it refers to Theodore Weiss's collected poems (1950 - 1986) titled 'From Princeton One Autumn Afternoon'.

Weiss (1916 - 2003) writes: An ideal I have held before me is a poetry, a language, absorbed in and exploiting its own immense resources yet, at the same time, transparent to the world at large.

Unfortunately for 'the world at large' or in this case the small portion of it that has nothing better to do than to read this humble blog of mine I have to disappoint Mr Weiss and his potential new reader.

My copy of the 436 page tome contains no less than three copyright notices - one inside and two on the back flap. Respecting these Canadian and American notices which contain words like 'no part of this book may be reproduced' and 'all rights reserved' and 'without permission in writing' I cannot help Mr Weiss reach 'the world at large' much as I would like to. And this is unfortunate.

We are living at a time in history when poems like 'Gunsight' (An interior monologue that records, through the voices in him, the sensations and memories of a wounded soldier undergoing surgery) might deserve a wider audience.

Mother, why do you, pale as hoarfrost glimmer-
ing on leaves, my blood upon your lips,
appear?

Weiss's poetry 'explores the human and natural condition . . . cuts through our individual predicaments and probes such pervasive matters as our historical circumstances, the refugee state most of us are in, the relentless search for basic identity and, finally, the problems of aging and dying'.

The title poem 'From Princeton One Autumn Afternoon' opens and closes:

Someone said all poems compose
one poem. Who's to judge him wrong?

But as the newest
critics tell us, it's a mistake,
if not a downright fake, to think
a work, whether it be painting,
poem, song, belongs to anyone.
By god

barefoot into glory,
instantly
immortal, in their name-free works.

Life is a bitter aspic. We are not
At the center of a diamond. At dawn,
The paratroopers  fall and as they fall
They mow the lawn. A vessel sinks in waves
Of people, as big bell-billows from its bell
Bell-below in the village steeple. Violets,
Great tufts, spring up from buried houses
Of poor, dishonest people, for whom the steeple,
Long since, rang out farewell, farewell, farewell.

Natives of poverty, children of malheur,

The gaiety of language is our seigneur.

Esthetique du Mal is a 14-page poem of 15 verses. The poem is to be found in the collection Transport to Summer which was was published in 1947, and in The Collected Poems of Wallace Stevens (a book to be treasured) which was published in 1955, the year of Stevens' passing, and awarded the Pulitzer Prize for Poetry.

The Malheur Bell was the trademark of the Malheur Telephone Company of Oregon which was founded in 1895 and ceased operations in 2009.

Over the hill someone approaching 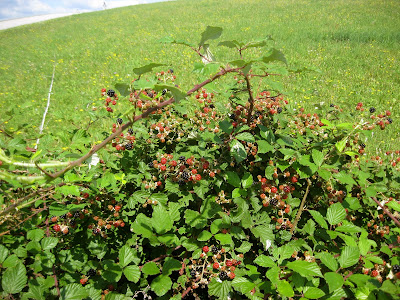 Under the hill
blackberries ripening